Many pet owners are aware that alcohol and chocolate present significant health hazards for dogs and cats and, appropriately, keep these items away from their pets.  These are not, however, the only items commonly found in the home which present a significant danger to our pets.  Identified below are potentially toxic plants, foods, and medicines of which we think all owners should be aware (note: these items are not listed in order of severity).

1. Aloe Vera Plants: These green succulent plants, which have spiky ridges and rubbery, hearty skin, are often found in gardens and grow widely in many urban areas. In small doses, Aloe Vera does have medicinal qualities;

however, aloe also contains a toxin (called Saponins) which is mildly to moderately toxic when ingested in large quantities and can pose a serious health risk to your pet. Symptoms include: vomiting, depression, diarrhea, anorexia, tremors, and change in urine color.

2. Azalea: This colorful flowering shrub contains a toxin (called Grayantoxin), which, when ingested, can produce serious adverse reactions in dogs and cats. Ingestion of as little as 0.2% of a pet’s body weight in Azalea can lead to the onset of symptoms which include: vomiting, diarrhea, hypersalivation, weakness, coma, low blood pressure, central nervous system depression, cardiovascular collapse, and death.

3. Poppy Plant Leaves: This brightly colored flowering plant (our official state plant!) grows wild throughout California. While beautiful, they contain an alkaloid compound that is mildly to moderately toxic to cats and dogs. If ingested, symptoms can include: loss of appetite, sedation, drunken walking, coma, slowed breathing, slowed heart rate, dilated pupils, and pinpoint pupils in dogs only.

4. Grapes and Raisins: Researchers don’t know what compound in grapes causes toxicity poisoning in dogs and cats, and it is therefore hard to predict if and when a dog or cat will actually get sick from eating grapes or raisins. However, we do know that toxicity from grapes is not dose dependent (i.e. eating one can be just as bad as eating 30) and that its toxicity varies even across multiple doses given to the same animal. In other words, a dog can eat 20 grapes and be fine, and, on a different occasion, eat 1 grape and become poisoned. Since it’s unpredictable whether ingesting grapes/raisins will, in any instance, be toxic, we highly recommend that you bring your pet in right away if you become aware that they have ingested grapes (even if they’ve been fine before!). Symptoms include: vomiting, diarrhea, abnormal drinking and urination, lethargy, loss of appetite, kidney failure, halitosis, dehydration.

5. Avocado: The flesh of this common pitted fruit is poisonous to birds but safe for dogs and cats. However, the pit of the avocado is a hazard – it can be swallowed whole by pets and become a foreign body obstruction in their digestive tract. Such obstructions can be just as harmful as poison, and so we recommend treating whole avocados with caution regardless of whether you have a bird or a dog. The toxin which causes poisoning in birds is called Persin and the symptoms in birds include: inability to perch, difficulty breathing, organ failure, and death.

6. Fruit Pits and Seeds: The pits in cherries, apricots, and peaches, and the seeds in apples, all contain cyanide—a toxin which prevents blood from carrying oxygen throughout the body and which can cause mild to moderate toxicity. So, while the flesh of these fruits isn’t toxic, we still advise caution when dealing with whole fruits such as these. Additionally, for those pet owners which grow any of these in their yard, the stems and leaves can also be toxic to dogs and cats, particularly when they are wilting. Symptoms for cyanide toxicity include: red and swollen mucus membranes (such as gums), dilated pupils, difficulty breathing, panting, and shock. 7. Acetaminophen: This is the name for the active ingredient in Tylenol and other similar pain relievers.

If ingested by cats and dogs it can cause moderate to severe toxicity and should be treated immediately. Symptoms include: lethargy, swelling face/paws, difficulty breathing, brown/blue gums, vomiting, loss of appetite/anorexia, black tarry stool, liver failure, jaundice, and death.

8. Wild Mushrooms: Found growing on and off trails and in gardens and parks throughout California, mushrooms can pose a serious threat to your pet’s health. The vast majority of mushrooms are benign but the ones that aren’t can be extremely toxic.

Unfortunately, it is quite difficult for most of us to distinguish between these different types of mushrooms; as such, if you cannot identify the species of mushroom your animal has ingested, we recommend that you treat it as though it were toxic and dangerous. Some of the types of mushroom known to be toxic are Amanita, Galerina, and Lepiota mushrooms (please note, this is not a comprehensive list). Symptoms of mushroom toxicity include: nausea, drooling, vomiting, diarrhea, abdominal pain, drunken walking, depression, tremors, seizures, and organ failure.

If you know or suspect that your pet has eaten something on this list, we highly recommend seeking immediate medical care. While our veterinarians can determine the relative toxicity of chocolate based on your pet’s weight and the amount of chocolate ingested, for any other items (including those on the above list) you will need to call a poison control hotline to consult with a trained toxicologist who will be able to provide direction to your veterinarian on the appropriate course of action to take. The two hotlines we most highly recommend are:

We hope this list will help you keep your furry companion safe! How to Feed Your Bird a Balanced and Nutritious Diet

Like humans, the long term health of birds is greatly[...] Allergies in Pets: How They Manifest and How to Treat[...] 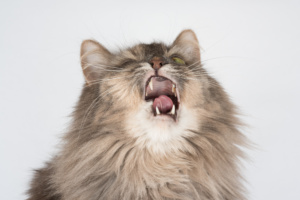 In our previous article on pet allergies we explained how[...]

Your email is safe with us.